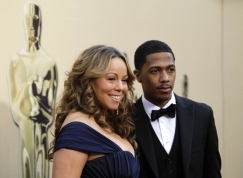 
Mariah Carey was in Tyler Perry’s upcoming movie—until this week!

She’s abruptly pulled out of her role in the adaptation of Ntozake Shange's 1975 play For Colored Girls Who Have Considered Suicide When the Rainbow Is Enuf, fueling rumors she’s pregnant!

Mariah quit the film yesterday, not stating any specific reason. Luckily, the film is still in pre-production, and not scheduled to begin filming next month. Her rep Cindi Berger told, "I'm not at liberty to discuss her personal life at this time.”

We’ve been hearing this rumor forever, but even more so lately! Plus, her husband Nick Cannon even wants to have kids soon! "We're going to do it, and when we do it we're going to let you all know," he said last year. "But right now, we're trying to enjoy the newlywed aspect."