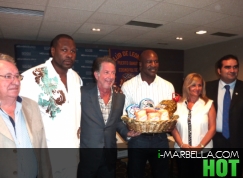 They personally donated €5,000 to Bancosol through Lions Club Cosmopolite.

The candidate for Nobel Peace Prize 2013 Yank Barry and boxing champions Evander Holyfield and Tony TNT Tucker, all members of Global Village Champions Foundation (GVCF), have personally donated today through Lions Club Marbella and Puerto Banús Cosmopolite, a total of 1,660 kilos of food, valued at €5,000 to the Food Bank of the Costa del Sol, Bancosol.

Yank Barry, president of the GVCF, who was also a candidate for the Nobel Peace Prize in 2012, together with the Boxing World Champion and Olympic medalist Evander Holyfield, and fellow Heavyweight Champion, Tony TNT Tucker, wanted to come to Marbella, to the Hotel H10 Andalucía Plaza, to meet the urgent needs of BancoSol. They personally deposited 1 ton of sugar, 600 liters of cooking oil and 60 kilos of baby milk to the Bancosol store. "We heard about the needs of Bancosol through Lions Club Marbella and Puerto Banús Cosmopolite and we are honored to offer our help."

"This is not the first time that we have helped those who need it most in Spain as last year, in 2012, we also donated a large amount of food after severe floods in this country," said Barry .

Up till today and since the founding of the NGO 19 years ago, the president of Global Village Champions Foundation and two ambassadors and have delivered 985 million plates of food around the world, and its short-term goal, before New Year, is to reach 1 billion meals delivered to the needy.

In addition to food aid, the president, Yank Barry, explained the other work this foundation is involved in: the help and liberation of refugees. They are currently working in Bulgaria, where they hope to help, by the end of the year, more than 80 people. To date they have already helped some families by getting them rare status of "European refugees" and in three weeks will travel back to the country to help the families of the hostages.

"Global Village Champions Foundation has no expenses of any kind nor do we accept donations from anyone. We ourselves make contributions in a personal way and we choose who we give them to," said Barry.

The foundation counts on partners, such as Mohamed Ali as a co-founder, Bill Clinton, Michael Jordan, Celine Dion, Jon Voight, etc. The five-time World Champion Heavyweight Evander Holyfield told the media that his mission as ambassador of GVCF, replacing Mohamed Ali -who can no longer travel as often for health reasons- it is an honor and a privilege for him. "My goal today isn ́t to be world champion in boxing, it is to be world champion in the help and support of those who need it most," he said.

The Heavyweight Champion Tony TNT Tucker stated that "it is much more rewarding and valuable to be part of these moments when you offer your personal support to those in need than to be world champion. I am proud and grateful for my work in GVCF ".
The president of the Lions Club Marbella and Puerto Banús Cosmopolite, Patricia Nahmad was honored and excited to share this moment with the three representatives of GVCF, "not only because they are champions, but because they are tremendously supportive people." Nahmad explained that the H10 Andalucía Plaza contacted them to tell them GVCF wanted to donate food to the needy "and we got down to the work – she assured - which indicates that 'love is power' and I've never seen such efficiency and speed in charity work of this nature. "

Carlos de la Torre, Bancosol coordinator, said today "I am privileged to have met these great people who give more value to their acts of solidarity that their championship titles".
The Bancosol representative thanked the Lions Club Marbella and Puerto Banús Cosmopolite and GVCF for their help and assured them they will hand over all the food to people who really need it through the various associations that exist in the city under their supervision.

A Gala Evening with Evander Holyfield in Marbella