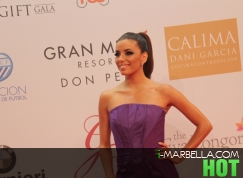 
The summer season in Marbella is officially over. Let's take a look back and see which celebrities came to the coast to work or to have some fun!

TOWIE stars
The stars from the TV series The Only Way is Essex are definitely half-living in Marbella in the summer. And their favorite places to hang out are the Sala Group's venues - La Sala, Sala Beach and Aqwa Mist! They never missed out a good party!
Read more about them HERE, HERE and HERE!

Vika Jigulina and Edward Maya
The Moldavian-Romanian artist Vika Jigulina, who is the voice of "Stereo Love" was in Marbella in the middle of March. The singer was staying in Marbella Club Hotel to perform in a private wedding! Read more about it HERE!

Eva Longoria visited Marbella twice this year. First time was in May, when she had the press conference about her charity projects. And the second time was in August for the 1st Annual Dynamic Walk-A-Thon & The Global Gift Gala that took place in August in Gran Melia don Pepe.
Besides the events Eva also found some time to go out to a private cocktail in Suite and later in Aqwa Mist! See also the falleries of the Global Gift Gala: Vol.1 and Vol.2

Maria Bravo
Maria Bravo has been organising philanthropic events with her company MandA Events in Marbella and this year she gave her hand to the 1st Annual Dynamic Walk-A-Thon & The Global Gift Gala that took place in August in Gran Melia don Pepe!
Read more HERE and HERE!

Aleksandr Mostovoi and Peter Nielsen
The famous retired footballer visited Marbella in the middle of May this year.
Read more about his visit HERE!

Georgia Salpa
Georgia Salpa, who is the World's 5th Sexiest Woman by FHM, showed off her sexy curves in Marbella in the middle of May. She has was on holidays in Spain and she spent a day at Nikki Beach wearing a tiny white bikini. Read more HERE!

Lamia Khashoggi (in the middle)
Kasser Rassu Gallery-Showroom organised an exhibition of paintings by Milena Burot on the 22nd of June. One of the attendees was the wife of Saudi Arabian businessman Adnan Khashoggi, Lamia Khashoggi, who was invited to the event by Ahmed Ashmawi!
See the gallery HERE!

Timati
On the 21st of July, the german designer Philipp Plein opened its boutique in Marbella with a luxurious party in Puerto Banus. As a surprise the Russian rapper and actor Timur Ildarovich Yunusov aka Timati took the stage and performed his most famous hits like "Welcome to Saint-Tropez", "I'm On You", "Rockstar" aso.  See the gallery HERE!

Kym Marsh
In the last weekend of July, the English actredd and former member of Hear'Say Kimberley Gail "Kym" Marsh celebrated her hen party at La Sala restaurant in Puerto Banus, that is owned by a group of premiership footballer’s both current and retired (David Bentley and Stephen Carr). Read more about it HERE!

The three famous movie stars were in Marbella for the Starlite Gala, that took place on the 4th of August, in La Cantera Auditorium of Marbella. The fantastic trio of “Two Much” back together 17 years later. See the gallery HERE!

Flavio and his wife Elisabetta
The Billionaire Club was conceived in 1998 by Flavio Briatore, who wanted a nightclub that could bring back energy and buzz to Costa Smeralda. In the beginning of July Flavio opened a Billionaire in Marbella(that is now closed) and attended the opening party with his model wife Elisabetta Gregoraci! See the galleries of Billionaire HERE and HERE!

Sanaa Hamri is a Moroccan American music video and film director, who is one of the few prominent female film and music video directors. She visited Marbella in the beginning of July for a weekend and also went out to party! If you didn't know she was the producer for Nicki Minaj' video "Super Bass" that has more than 260 million views on Youtube! Read more about her visit HERE!

Tim Krul
Timothy Michael "Tim" Krul (born 3 April 1988) is a Dutch footballer who plays as a goalkeeper for Premier League club Newcastle United and the Netherlands national team. Tim was seen in La Sala in the middle of September with his girlfriend. But this is not the first time Krul has been seen in Marbella, he was also seen here in August when he was on a night out with his friends. Read more HERE!

Javier and his girlfriend
Born in Madrid, the famous fashion designer Larrainzar spent his childhood between Spain and Germany. Now he is enjoying life in Marbella, doing padel surf and relaxing with his girlfriend Delfo Arnoldi after a stressful life in the fashion industry. Read more about him HERE!

Exclusive interview with the Queen of Marbella - Olivia Valere