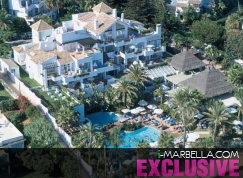 
The answer is: The one and only queens of house, Barbara Tucker and La India, are staying at the luxurious Hotel Puente Romano this weekend.

They arrived to the Hotel on Friday, 14th of December, and headed to Finca Besaya to have dinner. Later on the party continued in Club District 13 until the early hours. Tonight the beautiful divas are dining in Olivia Valere and will perform LIVE at night in the club!

If you don't know who India and Barbara Tucker are, let me introduce them:

India (born March 9, 1969), known also as "La Princesa de la Salsa" is a singer of salsa and House music. She has been nominated for both Grammy and Latin Grammy awards. India (born Linda Bell Viera Caballero in Río Piedras, Puerto Rico) grew up in the Bronx, New York, where by the age of seven she had put all shyness aside to nurture her love of the arts, training first as an opera singer and later moving on to runway modeling. Her voice has found a place in the hearts of music lovers everywhere. It has conquered diverse musical markets, from dance to salsa, in English and in Spanish. That voice is unique. That voice belongs to India. India may have exhibited a range of musical abilities over the course of her long and winding career, from freestyle and house to Latin pop and reggaeton, but she'll be defined forever by her run of chart-topping New York salsa hits for the RMM label in the mid- to late '90s, when she was crowned the Princess of Salsa by none other than Celia Cruz.

Barbara Tucker
Some call her the Queen or Mother of house, to sum it up Barbara Tucker is House. Besides being a singer/artist/performer recognized the world over, she is a Writer, Activist, Mentor, Stage Developer, Event/Club Promoter, Stylist, Label Owner, Artist Consultant, and Choreographer. Born in Brookyln, New York, Barbara Tucker's (45)impact on the music scene has been huge and she has scored a string of six #1 hits on the US Hot Dance Club Songs chart in the 1990s and into the 2000s, as well as several hits on the UK Singles Chart.

More info about the singers HERE!

15th of December
Dinner and party at Olivia Valere