Two house queens, Barbara Tucker and India, are coming to perform in Marbella! 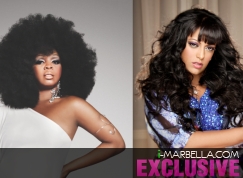 
The legendary house divas Barbara Tucker and India are coming to Marbella for the first time to perform during a fabulous Celebration of Life weekend that takes place on the 14-15 of December.

If you don't know who India and Barbara Tucker are, let me introduce them:

India (born March 9, 1969), known also as "La Princesa de la Salsa" is a singer of salsa and House music. She has been nominated for both Grammy and Latin Grammy awards. India (born Linda Bell Viera Caballero in Río Piedras, Puerto Rico) grew up in the Bronx, New York, where by the age of seven she had put all shyness aside to nurture her love of the arts, training first as an opera singer and later moving on to runway modeling. As a tribute to her beauty and free spirit, her maternal grandmother lovingly nicknamed her “India”, for her beautiful brown skin and her straight, raven hair that resembled her “taíno” ancestry.

Her passion for music instantly made her into a bold, charismatic and charming soul that easily connected and thrilled audiences. She made her debut in the music business in the decade of the ‘80s, in a popular dance group TKA. Caballero signed a record contract with Reprise/Warner Bros. Records, which planned on marketing her as the Latin version of Madonna (who recorded for sister label Sire Records). After recording the album Breaking Night, Caballero decided that she didn't want to take that route in her career.

An important event took place when she accompanied her husband to a studio recording. Salsa band leader Eddie Palmieri happened to visit the studio and was impressed with Caballero when he heard her singing. In 1992, Palmieri produced Linda's first Spanish-language salsa album Llego la India via Eddie Palmieri), which was acclaimed as one of the best salsa albums of the year. From then on Caballero became known to all as India.

India worked together with her husband back then, Louie Vega, and they recorded many house-music singles like "Love and Happiness", "To Be in Love", "I Can't get no sleep" and many more.

She later recorded Dicen Que Soy (They Say that I Am) which was a 2x gold-certified Billboard hit and included the song "Vivir Lo Nuestro", a duet with Marc Anthony. India also sang a duet titled "La Voz de la Experiencia" (The Voice of Experience) with Celia Cruz, the late Queen of Salsa. It was then that Cruz gave Caballero her longer name: India the Princess of Salsa. In 1997, India recorded "Sobre el Fuego" with Puerto Rican salsa singer Kevin Ceballo as backup. The song was nominated for Best Latin Tropical Performance Grammy Award. In 1998, she won an ACE Award.

On February 5, 2000, a full-page ad in Billboard Magazine congratulated India for her second Grammy Award nomination. In 2003, India released her 7th studio album: Latin Songbird: Mi Alma y Corazón. The album's lead single "Sedúceme" became a hit on the Latin charts and topped the U.S. Billboard Hot Latin Tracks for several weeks. This romantic salsa hit single was India's first number-one song, which brought her a new fan base with many awards and nominations, including two Latin Grammy nominations for Best Salsa Album and Best Tropical Song in 2003, and her third Grammy Award nomination for Best Salsa Album in 2004.

On February 23, 2010, India's newest single "Estupida" was released on iTunes. The single was recorded in two versions, a salsa version and a ballad version. India filmed a video for both versions were been released. The song debuted on the tropical billboard charts at #10 and made it to #1 in just a couple of weeks. India's ninth studio album, Unica, was released June 1, 2010.

Until today, India continues to release new music and perform live all over the world. Marbella has the honor to have her for the very first time and definitely not the last!

Barbara Tucker
Some call her the Queen or Mother of house, to sum it up Barbara Tucker is House. Besides being a singer/artist/performer recognized the world over, she is a Writer, Activist, Mentor, Stage Developer, Event/Club Promoter, Stylist, Label Owner, Artist Consultant, and Choreographer. Born in Brookyln, New York, Barbara Tucker's (45)impact on the music scene has been huge and she has scored a string of six #1 hits on the US Hot Dance Club Songs chart in the 1990s and into the 2000s, as well as several hits on the UK Singles Chart.

Barbara Tucker is a sensational entertainer that truly captures the essence why we go to performances. Her shows are extremely intense with her captivating voice and phenomenal stage presence. Question: Why do audiences worldwide cheer/applaud her performances whether they understand the language or not. Answer: They feel her Passion. Barbara is one of the rare performers whose true gift is touching people in a most positive uplifting way. Barbara has truly become a living breathing fiery fierce legend that you must experience. Barbara has been a major part of the house community for over 20 years.

Strong in her belief of the power of the stage, she performs from her pulpit, singing the message of everyday people, everyday love. Once Barbara has blessed the stage, you are guaranteed to be touched, to feel joy, and to move to her inspirational message. Barbara’s love of what she does for her fans allows her to go with the spirit of her audience, never giving the same show twice with nothing short of real. While others memorize every ad‐lib, Barbara rides on the feeling of the night. Barbara has been a strong force in the New York scene for years. As a promoter, all her hard work networking has also brought the house scene closer together around the world. She consistently promotes the Underground Network; “And let the Singer Be Heard” and “BT VocalContracting” by organizing tours and booking/producing up‐and‐coming artists, and Networking Producer and Singer together for creating of new works.

India and Barbara and many other amazing artists are performing during a fabulous Celebration of Life weekend that takes place on the 14-15 of December.

DJ MAG OCTOBER ISSUE REVIEW OF EP: DJ Romain feat. Hype Hunnets/Mobius Strum Luv In The Club EP (Ama Recordings) "When hip-house works, which let's be fair is a reasonably rare occurrence, it's unstoppable. Here it works blisteringly well for DJ Romain with the inane but overwhelmingly funky utterings coming from Hype Hunnets on Ray Okpara's Ama Recordings. Stuttering synths do the same thing throughout this solid but irresistible groove. If you genuinely object, there's an instrumental, leaving the old school, almost Boys Own-esque to do its work. Mobius Strum's 'That's What She Said' gets a little overshadowed, somewhat unfairly, because it's also excellent."

15th of December
Dinner and party at Olivia Valere

Please call and reserve your dinner or VIP table reservations right away!

More info about the weekend:
http://emkai.com/HTMLemail/CelebOfLife_20121214/

Exclusive interview with the Queen of House - Barbara Tucker (3)