Twins for Princess Charlene of Monaco 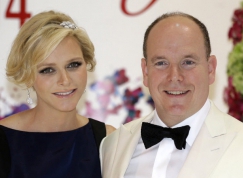 Gabriella was born first, at 5.04pm, and Jacques second, at 5.06pm. Jacques will be the future Prince of Monaco in accordance with the Mediterranean principality's male inheritance laws.

After 7.30pm, 42 cannon shots (21 for each baby) were shot around Monaco to confirm that the babies had been born.

Albert said that he had not know the sex of the children before birth.

Gabriella and Jacques are the first children for the 36-year-old Princess Charlene of Monaco, former South African Olympic swimmer, who married the 56-year-old Prince Albert II three years ago.