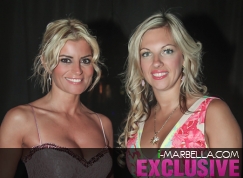 
The beautiful Author, Journalist, TV Presenter, MC, Sports Celebrity Ece Vahapoglu was the presenter for the Seven Star Global Luxury Award that took place on the 28th of June in Villa Padierna.

Ece Vahapoglu, one of Turkey’s best-known broadcasters, a prominent Turkish media personality with her own TV shows and best-seller books. Born in Istanbul, Ece Vahapoglu, has graduated from the American University of Rome in ‘Business’. She had her master’s degree in France, IEHEI on ‘EU and International Relations’. She was honored as ‘The Most Outstanding Young Person’ in 2001 by JC. She participated in ‘International Rising Stars Leadership Program’ invited by the US State Department.

She began her television career with NTV and CNBC-e in Istanbul, before spreading her wings with shows on SkyTurk TV, ATV and CINE5. She has acted as a TV presenter and master of ceremonies for many international events, both for private and public sector, including Formula One, FIA, UEFA broadcasts, World Travel Awards, Asian Racing Conference, European Quality Summit, European Business Awards and many events of the Ministries of Turkey. She presented ‘Istanbul Film’ in English supported by the Ministry of Culture and Tourism of Turkey.

A regular contributor to newspapers and magazines in Turkey, she is the author of six books and speaks Turkish, English, French and Italian. Ece is also a role model for sports and health, a certified wellness trainer and is a spokesperson for the Sports for All Federation of Turkey.

i-Marbella team met her in the awards gala and Ece was really friendly and very elegant. She said she is visiting Marbella for the first time and enjoying her time here. She also was amazed by the beautiful Villa Padierna and the setting of the whole Awards Gala.

The Seven Star Global Luxury Awards came into being in order to, not only recognize, but also to set apart the extraordinary achievements in the Hospitality and Lifestyle sectors by bestowing upon them the Signum Virtutis – the seal of excellence.

The Seven Star Global Luxury Awards, by the bestowing of the Signum Virtutis, serves as a guarantee to the luxury consumer that the recipients are truly the best in the industry.

This is a very exclusive club and it will remain this way as only the most prestigious will be awarded. Only this way can we be absolutely certain that only the pinnacle of Luxury enters the ranks of the Seven Star Global Luxury Awards.

The gallery of the award will be soon on i-Marbella.com exclusively!