Tony Blair spotted in Marbella with his family 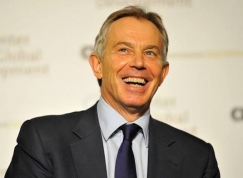 
While current British Prime Minister David Cameron is recovering from his jellyfish sting in Lanzarote, Tony Blair and his family have been spotted in Marbella.

The former prime minister of the United Kingdom Anthony Charles Lynton Blair has been spotted in public together with his wife together for the first time in months. He and Cherie have been married since 1980 and have four children; Euan, 30, Nicky, 28, Kathryn, 26, and Leo, 13.

Reportedly, the family was strolling around the beautiful old town streets of Marbella, accompanied by three bodyguards who tried to stop people taking photographs. The children were seen gawping at the window of a toy shop, while Cherie and an unknown female companion went clothes shopping.

The former prime minister was happy enough to greet passers by, but his security did not encourage any of it. The family also visited the church - Iglesia de la Encarnacion – where they explored inside without being stopped.

The pair were spotted also in Malaga with Antonio Banderas where they were watching a special Easter parade from the balcony of the Larios Hotel in Malaga where rooms cost between £130 and £160 a night.

Katie Price in Marbella with family and friends