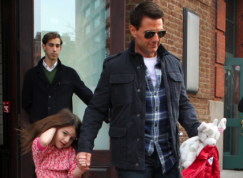 
Tom Cruise and Katie Holmes have reportedly splashed out $5,000 to rent an ice skating rink for their five-year-old daughter Suri for the whole winter season.

Tom Cruise has splashed out $5,000 to rent an ice skating rink for his daughter.

The Hollywood actor and wife Katie Holmes reportedly hired out the VIP-style Igloo warm-up area at New York's Rockefeller Center for the whole winter season in order for five-year-old Suri to hone her skating skills. A source told the New York Daily News: "Tom rented it for an entire session so no one else could use it."

The 49-year-old star - who has been promoting his latest movie 'Mission: Impossible - Ghost Protocol' in New York - snubbed the venue's refreshments and catered themselves with calorific treats for his daughter.

Instead of the standard food and drink offerings from the ice skating rink - which charges $75 for an hour-and-a-half session - Tom had hot chocolate from New York restaurant Serendipity 3 and sweets from confectionery store Jacques Torres ordered in "especially for Suri".

But Tom - who also has two adopted children, Isabella, 19, and 15-year-old Connor from his marriage to Nicole Kidman - needs no assistance when it comes to purchasing presents for his family because he likes all of his gifts to be personal. He recently explained: "We go out and get them. We go to the shops."

What did Tom Cruise give Katie for her 30th Birthday?