The voice and writer of "Stereo Love", Vika Jigulina, in Marbella Club Hotel! 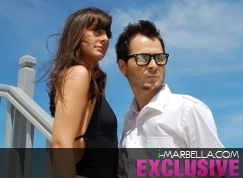 Vika Jigulina (born Victoria Corneva, age 26) is a Moldavian music producer, singer, and DJ. She was born in Cahul and graduated from the Rachmaninov School of Music. In 2000, she moved to Romania, where she still lives and there she worked in various clubs, eventually living in Bucharest. She landed a weekly show on the Romanian station Radio Deea and later on with VIBE FM that gave Vika her national exposure and fame. In 2010 she became an official Romanian citizen.

Jigulina has made mixes with Steve Murrano, ATB, Tomcraft, DJ DOX, Steve Angello, Sebastian Ingrosso, and other Romanian artists. She is most famous for being the vocalist in the international dance hit "Stereo Love" by Romanian producer and musician Edward Maya. She is also touring with Edward Maya in Canada in March 2011."Stereo Love" won the Billboard Music Awards 2011 for the Top Dance Song.

The singer was staying in Marbella Club Hotel earlier this week, performing Thursday night in a private wedding! She is currently working with Maya on his debut studio album The Stereo Love Show.

Marbella Club Hotel and Golf show their support for Animals