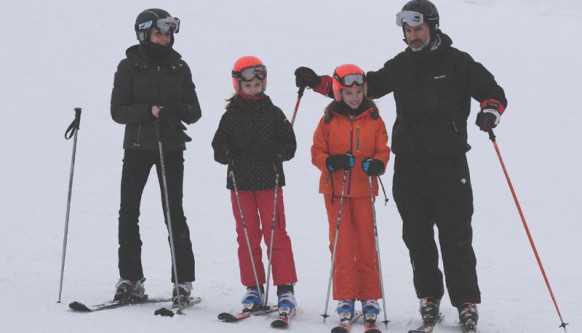 
Don Felipe and Dona Letizia have spent a very special weekend with their daughters. The Kings have travelled to Huesca to enjoy one of their great hobbies, skiing, a hobby which, apparently, have also been inherited by Princess Eleanor and Infanta Sofia.

After visiting one of the fashionable restaurants in Huesca, a city in north-eastern Spain, within the autonomous community of Aragon, yesterday, on Sunday the sovereigns have approached the ski resort to slipping along the tracks in the company of their daughters, 11-year-old Leonor and Sofia, nine. There they have been photographed posing in which they are the first images of the four skiing, some beautiful snapshots that show how well they have spent their weekend.

Well sheltered from the wind, snow and low temperatures, both Don Felipe and Dona Letizia opted for discreet looks in dark colours, with black helmets and protective glasses.

In the images, you can see how well this sport is given to Leonor and Sofia, as well as her mother, Dona Letizia, who, although she had not been photographed for years, seems not to have lost the practice. As for Don Felipe, he has been practising the winter sport since he was a child and seems to have been able to convey this hobby to his two daughters.

The Kings and their daughters have slept and had breakfast at the Hotel Villa de Anayet, in Canfranc, an Aragonese town especially known for its International Station, which inaugurated Alfonso XIII, great-grandfather of King Philip, among great festivals. In Canfranc they have also eaten this Sunday, specifically in the restaurant Borda l'Anglassé, where they have enjoyed their lunch surrounded by other skiers, visitors and inhabitants of the municipality.