The movie star Dolph Lundgren is in Marbella this week! 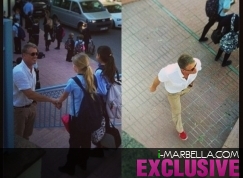 Dolph picking up his daughter from school Source: Anastasia Gilevich


Dolph Lundgren is a Swedish actor, director, and martial artist. He belongs to a generation of film actors who epitomise the action hero stereotype, alongside Sylvester Stallone, Arnold Schwarzenegger, Bruce Willis, Steven Seagal, and Jean-Claude Van Damme. He also has a master's degree in chemical engineering from the University of Sydney and a genius-level IQ of 160. The Rocky star was seen yesterday in Marbella, picking up his daughter from school!

In 1994 he married Anette Qviberg, a jewelry designer and fashion stylist in Marbella. The couple decided they liked the place so much that over the years they rented out accommodation there before eventually buying a family home. Their sunshine home is a stone's throw from Max Clifford's apartment in hills overlooking the Mediterranean in an exclusive residential area called Nueva Andalucia near Marbella.

They have two daughters: Ida Sigrid Lundgren (born 29 April, 1996) and Greta Eveline Lundgren (born November 2001), both born in Stockholm.The girls attend a British School; Lundgren and Qviberg have cited the reason for living away from Hollywood is that they want to give their children as normal a childhood as possible.In early May 2009, Lundgren's Marbella home was reportedly broken into by three masked burglars who tied up and threatened Qviberg, but fled when they spotted a family photo and realized that the house was owned by Lundgren. Dolph later stated that he believed the intruders to be from Eastern Europe and had contacts in Bulgaria investigating them, but to no avail; the intruders are still at large. As of 2011, the Lundgrens have been separated and filed for divorce. Dolph has moved back to Los Angeles and flies between LA and Marbella.  Dolph was seen yesterday picking up one of his daughters from school!