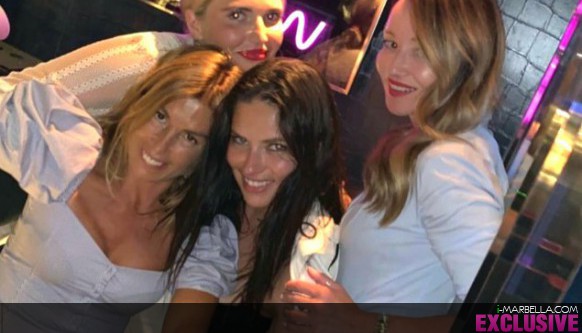 Adriana Lima in the middle, on holiday with friends in Marbella 2019 Source: Instagram


The Supermodel and Brazilian born choose Marbella Costa del Sol Spain coast among vacation destinations for its first summer as an ex angel where she has tried typical dishes of the area in addition to attending various events and parties at Nobu Marbella, La Suite Club Marbella with close friends and a concert Starlite 'Taburete'. August 3, 2019.

Adriana Lima's first summer holiday as a former Victoria's Secret angel after her emotional farewell to the firm last November 2018 was in nothing more and nothing less than in Marbella.

Among the holiday destinations, she has planned to disconnect from her new professional career at 38-years-old the ex angel has chosen Spain's Costa del Sol, specifically Puente Romano in Marbella to meet friends, party and dine.

Dressed in a beach dress, flip-flops, cap and glasses, the Brazilian top Adriana Lima began a vacation in Marbella in which she has not lacked plans. Proof of this can be found in her publications on social networks, where she has shown off her time in the city in the company of several friends, including stylist Ana Antic.

La Suite Club was one of the first stops Adriana had in Marbella.  La Suite is a sophisticated nightspot and event space in Marbella. Where Adriana enjoyed the beats of the DJ Sylvain Armand a master at subtly moving a crowd into ever deeper layers of bliss and ecstasy. La Suite is one of the best experiences you can have in Marbella and best night club in town.

Adriana Lima was spotted in a night out at the luxury on every level and world-renowned Nobu Marbella that has been cleverly integrated into the existing resort of Puente Romano Hotel, which has been part of the scene since Marbella first became fashionable back in the late 1970s.

Adriana has moved to enjoy moments of beach, music, sport, and plans between friends. Some activities and a destination where he has shown his more casual image and that has led him to launch a strong message to his followers to show her love for Spain.

The ex angel of Victoria's Secret was one of the faces known to be seen at the concert of Taburete in Starlite, in which she enjoyed as one more fan.

During her holidays in Marbella, she has also enjoyed the typical gastronomy of the place. A salted fish in the beach bar of the exclusive Marbella Club hotel was one of its tastings, followed by a dinner served by Dani García himself in his three-star Michelin restaurant.

The Brazilian has shared the moment with her fans, and to the video, she has added a comment: "Qué bien se come en España" (How well you eat in Spain). There is nothing better than a fried fish in a beach bar on the Andalusian beaches.

But it wasn't all exclusive dinners. The top didn't hesitate to wear an apron to cook spaghetti with tomato sauce, which her friends showed on Instagram. "Homemade pasta made by Adriana", published Ana Antic.

The beach was also one of the star plans for the model, which could be seen in a buggy by the promenade or on the seashore, enjoying his companions.

Baths, shopping, beauty treatments, meals... A whole host of plans to which the Brazilian top included a visit to the Puente Romano tennis club.

Adriana Lima was born on June 12, 1981, in Salvador, Bahia, Brazil. She was discovered when she was in a local shopping mall with her mother at the age of 13. Just two years later, she won first place in Brazil's Ford Supermodel of the World Search

Named one of luxury's 25 Most Innovative Brands by Robb Report, Nobu Hospitality is ranked among an elite selection of global luxury brands. The natural growth of Nobu hospitality, built on service, image, and reputation, offers the complete spectrum of a hotel, restaurant and residence management for unique projects around the world. Founded by Nobu Matsuhisa, Robert De Niro, and Meir Teper, with operations spanning five continents, the Nobu brand thrives in the world's capitals as the ultimate destination lifestyle experience.