Richest Man in the World comes to Marbella 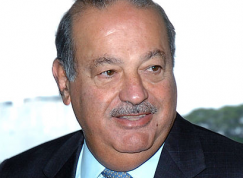 
The Starlite Gala, that takes place on the 9th of August 2014, will award Carlos Slim, the richest man in the world.

The Mexican businessman will receive special humanitarian award on August 9 on the Starlite Gala in Marbella, which is already the fifth edition of the Gala, one of the most important charity events in Spain. This time, Carlos Slim, the Mexican tycoon who has recently overtaken Bill Gates’ title "the richest man in the world", according to the latest Forbes list will receive a humanitarian award.

The event will be presented by Valeria Mazza and Joaquin Prat, and hosted by the International Málaga actor, Antonio Banderas. Also Agatha Ruiz de la Prada, Enrique Ponce, Paco Arango or The Man in Black will be at the event among many others.