"Princess of Salsa" La India: "I'm so excited to come to Marbella!" 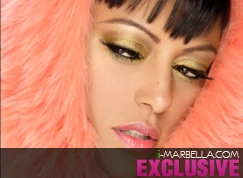 
India is more than an international artist, she isa Latin music diva! And not only Latin, having cooperated with the famous Masters at Work, she is also well-known in the house music scene! i-Marbella got a chance to talk to the queen for five minutes over the phone, before she comes to Marbella to perform in Olivia Valere on the 15th of December!

1. When did you start writing music?

At a very early age. Music has always been a part of my life and I have always loved to sing so it came naturally.

I get inspired by music.

3. You have worked with incredible musicians. Who has taught you the most?

I can't point out anybody particularly, all of them have taught me something. But there is amazing talent in Latin America and I get really inspired by country music.

4. Do you have any favorite songs?

No I don't. Songs are songs. It's all about intensity. I really love all the songs I made with Masters at Work team so I could taste the dance world scene.

5. What are you working on at the moment?

I'm collaborating with the wonderful Juan Gabriel in the studio. He is amazing.

6. Have you ever been to Marbella?

No actually I haven't, so I'm very very excited to come next weekend! See you at Olivia Valere on the 15th of December!

India (born March 9, 1969), known also as "La Princesa de la Salsa" is a singer of salsa and House music. She has been nominated for both Grammy and Latin Grammy awards. India (born Linda Bell Viera Caballero in Río Piedras, Puerto Rico) grew up in the Bronx, New York, where by the age of seven she had put all shyness aside to nurture her love of the arts, training first as an opera singer and later moving on to runway modeling. As a tribute to her beauty and free spirit, her maternal grandmother lovingly nicknamed her “India”, for her beautiful brown skin and her straight, raven hair that resembled her “taíno” ancestry.

Her passion for music instantly made her into a bold, charismatic and charming soul that easily connected and thrilled audiences.    She made her debut in the music business in the decade of the ‘80s, in a popular dance group TKA. Caballero signed a record contract with Reprise/Warner Bros. Records, which planned on marketing her as the Latin version of Madonna (who recorded for sister label Sire Records). After recording the album Breaking Night, Caballero decided that she didn't want to take that route in her career.

An important event took place when she accompanied her husband to a studio recording. Salsa band leader Eddie Palmieri happened to visit the studio and was impressed with Caballero when he heard her singing. In 1992, Palmieri produced Linda's first Spanish-language salsa album Llego la India via Eddie Palmieri), which was acclaimed as one of the best salsa albums of the year. From then on Caballero became known to all as India.

India worked together with her husband back then, Louie Vega, and they recorded many house-music singles like "Love and Happiness", "To Be in Love", "I Can't get no sleep" and many more.

She later recorded Dicen Que Soy (They Say that I Am) which was a 2x gold-certified Billboard hit and included the song "Vivir Lo Nuestro", a duet with Marc Anthony. India also sang a duet titled "La Voz de la Experiencia" (The Voice of Experience) with Celia Cruz, the late Queen of Salsa. It was then that Cruz gave Caballero her longer name: India the Princess of Salsa. In 1997, India recorded "Sobre el Fuego" with Puerto Rican salsa singer Kevin Ceballo as backup. The song was nominated for Best Latin Tropical Performance Grammy Award. In 1998, she won an ACE Award.

On February 5, 2000, a full-page ad in Billboard Magazine congratulated India for her second Grammy Award nomination. In 2003, India released her 7th studio album: Latin Songbird: Mi Alma y Corazón. The album's lead single "Sedúceme" became a hit on the Latin charts and topped the U.S. Billboard Hot Latin Tracks for several weeks. This romantic salsa hit single was India's first number-one song, which brought her a new fan base with many awards and nominations, including two Latin Grammy nominations for Best Salsa Album and Best Tropical Song in 2003, and her third Grammy Award nomination for Best Salsa Album in 2004.

On February 23, 2010, India's newest single "Estupida" was released on iTunes. The single was recorded in two versions, a salsa version and a ballad version. India filmed a video for both versions were been released. The song debuted on the tropical billboard charts at #10 and made it to #1 in just a couple of weeks. India's ninth studio album, Unica, was released June 1, 2010.

Until today, India continues to release new music and perform live all over the world. Marbella has the honor to have her for the very first time and definitely not the last!

Two house queens, Barbara Tucker and India, are coming to perform in Marbella!