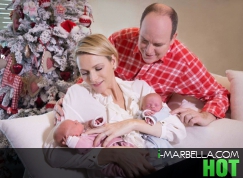 
The royal family have posed for official photographs with their baby twins.

The images of the royal couple posing with their twins, who were born on 10 December, were taken by Frédéric Nebinger and they also appear on the cover of the French weekly Paris Match.

The magazine reports that the chosen clothing for the twins (baby pink and baby blue, but of course) was inspired by what Albert's late mother Princess Grace picked for her baby photoshoots.

"I was present in the operating room and assisted at their birth. I helped my wife as I could – that's to say, by my presence. It was wonderful. I don't have the words to describe how it felt then or the deep joy I feel now," Prince Albert told the publication.

"Having children – and twins at that – is an extraordinary experience. It's unique. And it's a challenge for us as parents."

Not only is this a lovely gesture for the people of Monaco but Princess Gabriella and Prince Jacques will be presented publicly on 7 January in the palace square which will be a public holiday to celebrate the new arrivals.

The twins are the 36-year-old former South African Olympic swimmer's first children. The prince, 56, has two other children, but as they were born outside of marriage they are excluded from the throne and a spokesperson has already confirmed that Jacques will be the next in-line to the throne.