Paris Hilton Came to Marbella with a Private Jet 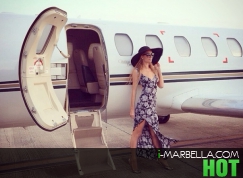 As you can see from the American socialite’s Instagram, she travelles by private jet. Paris Hilton flew to Marbella on the 18th of August to play a DJ set in Olivia Valere.

Taking to Instagram on Wednesday, the 33-year-old entrepreneur uploaded several photos of her and friends posing beside the privately owned jet as she headed from Ibiza to Marbella for another DJ set.

While Paris gets to work as a DJ and singer, her younger sister Nicky Hilton is gearing up for life as married woman as on Tuesday it was announced that she got engaged to her boyfriend James Rothschild. The 30-year-old fashion designer and heiress, who has been in a relationship with the banker since meeting at Petra Ecclestone and James Stunt's Italy wedding, is said to be 'incredibly happy' after he proposed to her in Lake Como last weekend.

The American heiress played a DJ set at nightclub Olivia Valere last night August 18. The diva visited Marbella with her Spanish model boyfriend River Viiperi for the show before departing in their private jet to Ibiza and Barcelona. The American hotel heiress is most famous for her appearances in reality show ‘The Simple Life,’ with Nicole Richie as well as the 2004 sex tape. What do you think about Paris Hilton?

Check out the photos of Paris Hilton in Marbella HERE and HERE!