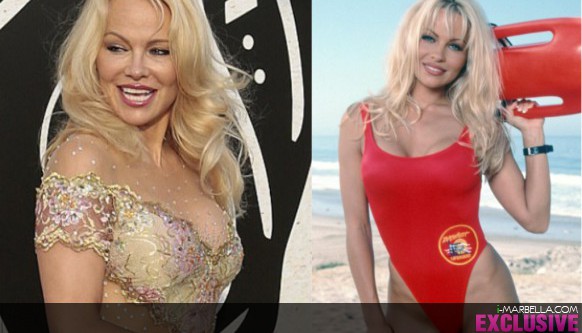 
Pamela Anderson is the best person to keep you safe on the opening of new beach club Playa Padre in Marbella Saturday on 27th of May 2017. The TV sensation, 49, proved she is a bombshell in a near-nude off-the-shoulder dress, teasing her completely underwear-free display with well-positioned sheer panels.

Pamela Anderson, 49, is one of the most iconic stars of the ’90s due to her time spent on the NBC lifeguard drama Baywatch, a show so classic they just made a comedic movie based off of it a full 20 years after the show first premiered! The actress practically oozes sex and will always have totally infatuated fans all over the world.

Kelly Rohrbach will slip into the role Pamela played from 1992 until 1997, alongside stars Dwayne Johnson, Zac Efron and Priyanka Chopra.

Both Baywatch beauty Pamela and David Hasselhoff have secured themselves cameo roles in the upcoming release.

The original ‘Baywatch’ babe headed to Marbella beach club opening party on May 27  on 2017 wearing a stunning gold gown — minus the underwear — and she looked fierce!

Leaving little to the imagination, the Baywatch beauty showed off some serious skin with cutaways on her hips and chest covered in just delicate diamantes.

She proved her beauty was ageless, looking the spitting image of her younger self in her Baywatch days.

Pamela Anderson new flick is a comedy adaptation of the NBC drama series which propelled her into the spotlight.

Pamela Anderson in her personal life, she has been romantically linked to the founder of WikiLeaks Julian Assange.

Pamela Anderson enjoyed cutting the ribbon to mark the opening of the new Spanish Beach Club in Marbella.

Pamela Anderson with Maria Bravo at the beach club opening

International business and philanthropist Maria Bravo has unveiled this afternoon her new place of entertainment in the Cable of Marbella, called Playa Padre, "a Beach Club whose design and look represents the modernity of places with style Most current in the United States, "according to interior designer Nicolás Escanez, co-owner of Playa Padre, which is intended to be the most international fashion spot in the summer of Marbella.

Elizabeth Alexandra 06-07-2017 08:32 My Ex and I broke up 1 year and 2 months ago and i was six months pregnant. We both love each other and it was a shock to me and it really broke my heart. I tried to call him and both of his lines were disconnected. I tried to reach him on social networks but he deleted me off of them. I tried to reach his parents and they told me that their son said that he does not love me and does not want to see me and they do not know what is wrong. I cried and cried everyday because I loved him very much. Until I gave birth and the baby was one year old, I could not get my love back. Again, I was confused. I do not know what to do and I also lost my job and I have no money to take care of the baby. I was miserable in life so I cried to my sister and told her my problem and said that she knew of one powerful spell caster that helped her when she could not get pregnant. I contacted him by email and he said he will help me and told me that a woman cast a spell upon my man and said he will help me break the spell so my man will come back to me and be mine forever. It was a great surprise to me that everything that he said came to pass. My man came back to me immediately, saying that I should forgive him. I am sending a very big thank you to this powerful and real spell caster. I pray for him to live long and do more of his wonderful work. If you have any kind of problem disturbing you in life, you have to contact this powerful spell caster! He can help you. He will not disappoint you, I give you 100% guarantee that he will help you, Here’s his contact: Email him at: Unityspelltemple@gmail.com , you can also call him or add him on Whats-app: +2348071622464 , you can also visit his website:http://unityspelltemple.webs.com .

Lorna Harron 19-06-2017 21:12 Testimony On How My Ex Come Back.
My name is Lorna Harron, and I base in USA...My life is back!!! After 2 years of Broken marriage, my husband left me with two kids . I felt like my life was about to end i almost committed suicide, i was emotionally down for a very long time. Thanks to a spell caster called Dr Ogboni, which i met online. On one faithful day, as I was browsing through the internet,I came across allot of testimonies about this particular spell caster. Some people testified that he brought their Ex lover back, some testified that he restores womb,cure cancer,and other sickness, some testified that he can cast a spell to stop divorce and so on. i also come across one particular testimony,it was about a woman called Sonia,she testified about how he brought back her Ex lover in less than 2 days, and at the end of her testimony she dropped Dr ogboni's e-mail address. After reading all these,I decided to give it a try. I contacted him via email and explained my problem to him. In just 48hours, my husband came back to me. We solved our issues, and we are even happier than before Dr Ogboni, is really a gifted man and i will not stop publishing him because he is a wonderful man... If you have a problem and you are looking for a real and genuine spell caster to solve all your problems for you. Try High ogbonispelltemple@hotmail.com anytime, he might be the answer to your problems. Here's his contact: ogbonispelltemple@hotmail.com or call him :+2347054263874
0