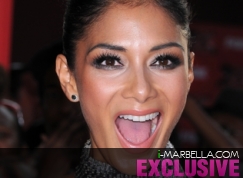 
The beautiful singer and X Factor judge celebrated her Birthday on Friday night, 28th of June, in Suite nightclub in Hotel Puente Romano.

Nicole Elikolani Valiente Prescovia Scherzinger, born June 29, 1978, is an American singer, songwriter, dancer, record producer, model and actress. Born in Honolulu, Hawaii and performing in singing and dancing competitions as a child, Nicole began her music career as a member of Eden's Crush, which in 2003 she was relocated to join The Pussycat Dolls, one of the world's best-selling girl groups of all time and later going solo. Since the beginning of her career in 1999, Scherzinger has sold 80 million records worldwide. She has served as a judge on The X Factor in the United Kingdom since 2012, and for the first season in the United States in 2011.

In 2009, Billboard ranked her, along with The Pussycat Dolls, as one of the top ten most successful musical acts of the 2000s.In 2011, Rolling Stone ranked Scherzinger the ninth best dancing musician.She also appeared on VH1's list of the "100 Greatest Women in Music" in 2012 and was ranked eighth "Sexiest Artist of All Time" in 2013.In 2013, Scherzinger was The Harvard Foundation's "Artist of the Year".Scherzinger's work has earned her awards and accolades, including two MTV Music Video Awards, three Billboard Music Awards and a Cosmopolitan Award.

The beautiful pop star has been relaxing in Marbella this week, and was seen shopping and partying in Puerto Banus. But Friday she had lunch in the brand new Del Mar by the sea and continued her Birthday celebrations in Suite nightclub with her friends.

Have you seen her in Marbella?