Michael Schumacher out of coma and leaves hospital after ski accident 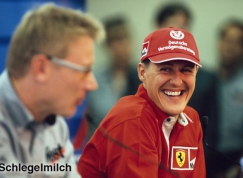 Michael Schumacher is no longer in a coma and has left intensive care in Grenoble hospital nearly six months after his life-threatening skiing accident, his manager has confirmed. On behalf of the Schumacher family, who have steered clear of the public eye, Sabine Kehm said the family were “sure” the wishes of fans had helped the seven-time Formula One champion recover and begin his rehabilitation.

In a statement, Kehm said: “Michael has left the CHU Grenoble to continue his long phase of rehabilitation. He is not in a coma anymore. “His family would like to explicitly thank all his treating doctors, nurses and therapists in Grenoble as well as the first aiders at the place of the accident, who did an excellent job in those first months.

“The family also wishes to thank all the people who have sent Michael all the many good wishes to Michael. We are sure it helped him.

“For the future we ask for understanding that his further rehabilitation will take place away from the public eye.”

No further details regarding where Schumacher has been transferred to have been made public and no press conference with his family is expected. Schumacher had been in a medically induced coma in Grenoble, France, since being badly injured in a ski accident on December 29 in the French resort of Meribel with his son and friends. The 45-year-old struck his head on a rock while skiing off-piste.

The 45-year-old Schumacher underwent two operations in the days after the accident to remove life-threatening blood clots before being placed into a coma. The family announced at the end of January that drugs used to keep him in his deep sleep were being reduced with a view to bringing him back to consciousness.

Announcements have been few and far between since the accident but the latest news will bring cheer to his millions of fans across the globe and the Formula One community at large. Schumacher won an unprecedented seven titles in F1: two with Benetton in 1994 and 1995, and five consecutive championships with Ferrari from 2000 to 2004. The German came back to the sport with Mercedes in 2010, securing only one podium before retiring for a second time at the end of 2012.