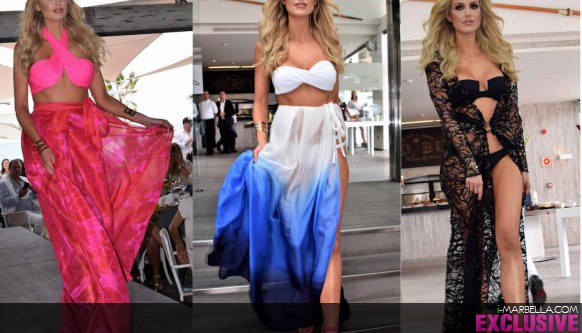 
Irish Miss World 2003 Rosanna Diane Davison (born 17 April 1984) is an Irish actress, singer, model and beauty were in Marbella in Virgina Macari Fashion Show on of the celebrity model. i-Marbella.com had a chance to do the short interview with her 5 of May 2017 at Puente Romano Beach Resort and Spa.

Rosie, 34, appears just as stunning in 2017 as in 2003.
During the years she become a businesswoman, and best-selling author overwhelming popularity of her cookbook "Eat Yourself Beautiful."

She is a daughter of Christopher John Davison (born 15 October 1948). He is known professionally as Chris de Burgh, is a British-Irish singer-songwriter and instrumentalist. He is an art-rock performer who also writes pop-oriented material. He has had several top 40 hits in the UK and two in the US. His most famous love song "The Lady in Red," was realized in  1986 that reached the number one top charts in several countries. De Burgh sold over 45 million albums worldwide.

The song "For Rosanna" was written by her father, Chris de Burgh, for his 1986 album, to light Rosie's honour.

Rosie entered the Miss Ireland finals in Dublin, in August 2003. As we all know,  Rosie won the competition, finding herself competing for the title of Miss World. December 2003, along with 106 other contestants, she competes in the Miss World competition in Sanya, China. Rosanna went on to win the crown and is the first Irish entrant ever to win the Miss World title since it started in 1951.

Annika Urm had a brief conversation with her:

1. How have time changed since you won Mis world 2003 and what Miss World title brought to your life?

When I won Miss World 2003 title, I was traveling so much around the world. I went to the United Kingdom, the United States, Canada, China, Sri Lanka, Germany, South Africa, Ghana, Mauritius, Nigeria, Barbados, Indonesia, Poland and her native Ireland. It gave me the whole new perspective on an entire world, I made a lot of charity and still do.
Also in this time didn't excite Social media, we had only press and faxes. Everything has changed tremendously. Social media is expanding after this exploding.

2. I head you are now food and health nutrition specialist. What are you doing now?
Yes, in 2010 I went to study for 3-years at the College of Naturopathic Medicine, where I've graduated with a title Nutritional Therapist. I have also studied with the US-based Institute of Functional Medicine. I have qualification since 2013.

I have written two bestseller books "Eat yourself beautiful" and "Eat yourself fit".
I write my blogs; I run fitness and health events, I do cooking demos in Irland. I have my website http://www.rosannadavisonnutrition.com/ you can read all bout my nutrition and healthier life there.
I also still do a lot of modeling.

Every day I have different work to address which is what I like very much!

3. How do you know Virginia?
I have known Virginia for many many years, when she used to do events in Irland, in Dubin.
I love her swimwears couture. They're so beautiful, elegant, glamourous. You feel, so chick wearing them.

and Irish Celebrities in Puente Romano in Marbella 2017