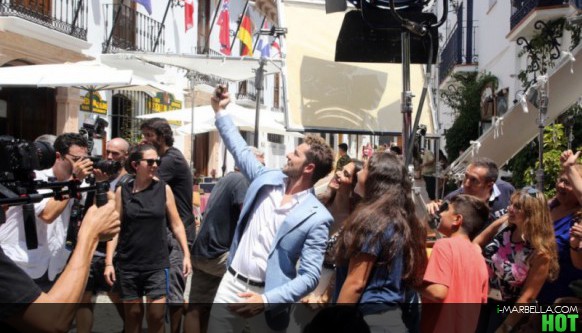 
Marbella's downtown experienced a higher ranking than usual on Friday, August 10th, 2018 since the Spanish pop superstar David Bisbal appeared in the streets recording his next video clip with a Colombian singer and model Greeicy Rendon.

The streets of Marbella’s old town became on Friday morning the scene of David Bisbal's new video clip, a film that has counted with the support of Marbella Film Office delegation of tourism.

Early in the morning, a filming team and cameras settle down at Calle Ancha, a spot where around 11 in the morning started the video clip filming.

Bisbal has also chosen other locations within Marbella old town like Calles Rafina and Aduar, where several sets have been filmed, Of course, the filming of the video clip attracted several prying eyes of neighbors who didn't want to miss a chance to take a selfie with the Spanish pop star. David Bisbal also visited some weeks before Marbella holding a show at Starlite Festiva.

The recording has mobilized an average of 70 people including all filming team and technicians around all the old town and has moved through some of the most emblematic streets of Marbella. But Bisbal was not alone. Next to him, the talented Greeicy Rendon.

Wearing in an American jacket, shirt and his traditional curly hair, the man from Almeria has gotten completely into the role of a man in love. Although, we know it could've been that hard, since a month before he married Rosanna Zanetti, after a little more than a year of a relationship.

The Colombian actress and singer Greeicy Rendon is the protagonist of her new video clip, and because of her, Bisbal begs for love, almost literally. We can only check the photos to understand what was the video clip shot about it.

Spanish singer got really into his video role, including sensual dances, He's even got on his knees! And she, as it could not be otherwise, has enjoyed an amazing time with David.

The subject or name of the video clip is shooting is so far an unknown. Almeria team members have assured this digital that they are not authorized to provide the name of the song, so it is unknown if it will be a new song or a video clip of any of the songs of his latest studio work "Hijos del Sea".

David Bisbal will stay in Marbella since he has another appointment with Starlite. The singer will be one of the guest stars who attends the charity gala, which, every year, organizes the festival and whose master of ceremonies is Antonio Banderas.

The singer continues to rising professional successes, with new dates confirmed in September, October and November. In regards to his romance life, he recently got married to Rosanna Zanetti, and they've been spotted together last month in Marbella as well, Bisbal is currently attending a tight agenda but hopefully will have time soon to celebrate the honeymoon with his wife.

Born in Almería, Spain on June 5, 1979, he is a Spanish singer, songwriter, and actor. He gained his initial fame as a runner-up on the interactive reality television show Operación Triunfo. He has since released five studio albums, all of which topped the Spanish Albums Chart, in addition to recording a number of live albums. He has toured throughout Europe and Latin America and is now considered to be a crossover international artist.