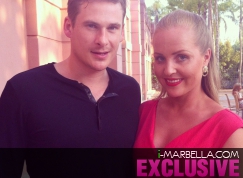 The hot pop star, who is a member of two time Brit Award winner and four time platinum selling pop band, Blue, attended a private event and also stayed two days in the beautiful Villa Padierna Palace Hotel. He was here for the Launch of Heritage Media European Headquarters. Heritage Media are a specialist media company that focus  on financing of film productions with their new corporate offices located in Estepona, Spain. And since Lee Ryan is in the film industry as well, he is also working with Heritage Media.

Lee Ryan told i-Marbella that it was his first visit to Marbella, and he really likes it here and he loves the hotel. During his 2-day stay he said he will definitely play golf and probably not even leave the premises of the hotel. He is still actively performing with Blue, also travelling to Russian for concerts. Lee performed couple of songs also in the private event, one of them was of course Blue’s most famous hit “One Love”.

Lee Ryan was born in Chatham, Kent. His parents split up when he was six years old. Ryan mostly lived with his mother, sister Gemma and his grandmother. At the age of 5 it was discovered that he suffered from dyslexia. Ryan went to Bedonwell School before attending performing arts schools, including the independent fee-paying theatre schools Sylvia Young Theatre School and Italia Conti Academy of Theatre Arts.

In 2001, he became a member of one of the UK’s most popular boybands, Blue. The band released two albums and sold more than 14 million records worldwide. Blue split in 2005 with Lee going on to pursue a solo career.

To date, Lee has released one solo album and six singles, his biggest solo hit being Army of Love which reached number 3 in the UK singles chart. He’s made a few TV appearances, most notably on Hell’s Kitchen where he was thrown off the show after falling out with Marco Pierre White.

Blue reformed in 1999 for a reunion tour, and then went on to have a crack at Eurovision in

2011 with the song, I Can. They couldn’t. In January 2011 Lee reported that he and the boys are working on a brand new album.