John Thomson with Irish Celebrities in Puente Romano in Marbella 2017 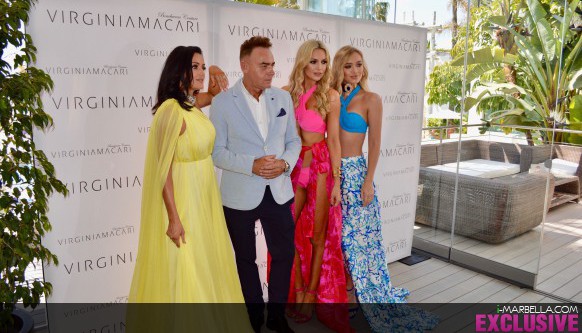 Mr John Thomson is the Corporate Director of Food & Beverage at MC, a man who brings the most exquisite food and premium service to MC Hotels' restaurants and clubs formed of eleven luxury hotels. Mr John Thomson lives in Marbella (originally Scotish) but as a keen traveller and can now be found practically anywhere around the globe. Therefore we were happy to see him with the rest of the Irish celebrities.

At the one of the most anticipated luxury event, a photocall featuring Irish DJ and model Vogue Williams,  Irish Miss World 2003 Rosanna Davison and UK TOP Model Roxy Horner took place, after which, Vogue turned to the DJ decks for the most glamorous fashion show of the calendar year, followed by an unforgettable party for the 200+ guests.
Roxy Horner is a fantastic UK TOP Model who charmed with her beauty even the incredible Leonardo DiCaprio! These two are friends!

Vogue Williams, UK TOP Model Roxy Horner and Miss World 2003 Rosanna Davison.
Vogue Williams famous Irish model, television and radio personality  who  did a fantastic job on her  Vogue Williams – On the Edge show, where she addressed issues the affect lives of Millennials per say drugs, social anxiety, gender dysmorphia and the obsessiveness for  'the body beautiful.'

Rosanna Diane Davison is an Irish actress, singer, model and beauty queen who won the Miss World 2003. The song "For Rosanna"  was written by her father, Chris de Burgh, for his 1986 album, Into the Light in her honour.

Virginia Macari Designer of the show, Mr. John Thomson and Miss World 2003 Rosanna Davison. All from Irland
Fashion show by Irish designer Virginia Macari The Paradise Collection was brought to life by Brazilian beauty and top model Cindy Mello, shot on location on a magnificent Sail Boat & Beach in Lagos in Portugal, there’s no surer way to get yourself in the mood for a luxurious, scorching summer. The couture designer’s offering features stylish beach cover-ups, statement bikinis and pays a particular homage to the return of the elegant one-piece swimsuit.

The Lodge Ski&Spa to Re-Open in Sierra Nevada