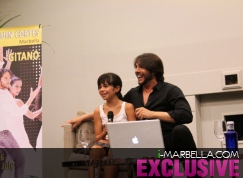 
Córdoba-born Joaquín Cortés – hailed as one of the ten best dancers of all time – brings ‘Gitano’, his latest Show, to Marbella this Friday and Saturday night, 25 and 26 of July.

But before the concerts, Joaquin decided to do something special, so a private masterclass was organised and he took the stage not to dance this time, but to talk about his life and answer the questions from the fans and the general public. The masterclass took place on Tuesday, July 22 at Puente Romano Beach Resort and it was free of charge. The artist's goal was to present some of the least known aspects of his art, share images of some of the best career moments, and offer advice and get to know his fans and flamenco enthusiasts.

Joaquin spoke about performing in huge and important venues, such as Madison Square Garden, the White House or the Royal Albert Hall, what it meant to him and how humbled he is sharing tables level with artists Jennifer Lopez, Alicia Keys and Michael Jackson.

Among all the participants, 20 of them also had the opportunity at the end of the session to meet Joaquin in person and share a few minutes with him backstage, take pictures and ask him about his work and career.

One lucky fan asking questions from Joaquin got a special ticket to his concert including a backstage pass!

Fusing the most orthodox flamenco with both classical ballet and contemporary dance, ‘Gitano’ – Gypsy – has been acclaimed as Cortés’ most spectacular Show to date, which the world-famous dancer and choreographer describes as “a journey through dance and music… an explosion of dance in which I want to take the audience on a journey, the journey of my life”…

And you are also invited to mingle with Joaquín Cortes, his dancers, musicians and entourage at the after-show party at the famous La Sala by the Sea Restaurant in Puerto Banús taking place immediately after the 26 July performance.

Do not miss his show this Friday and Saturday!