Joaquín Cortés - One of the Top 10 Dancers in History 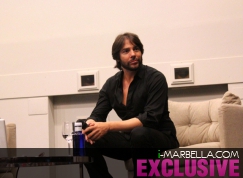 Joaquín Cortés is considered by different experts and researchers in the field of flamenco music as one of the top ten dancers in history.

Joaquín Cortés was born in Córdoba in 1969 in the heart of a gypsy family. He soon moved to Madrid, where at twelve years of age he began his dance studies. At the age of 14 he was admitted as a member of the National Ballet of Spain. Joaquín Cortés travelled with this company around the world, dancing in theatres such as the Metropolitan Opera House in New York and the Kremlin in Moscow. At sixteen years of age and for the following three years he performed as a Main Dancer.

Since then, Joaquín Cortés has become the most international and renowned Spanish dance figure, having participated in major world events such as the MTV Music Awards or The Oscars, together with choreographer Debbie Allan.

Joaquín has performed in the most important scenarios and danced alongside names such as Jennifer Lopez and Alicia Keys, among many others. He made his film debut with the film “The flower of my secret” by Pedro Almodóvar. He also starred in Carlos Saura's film “Flamenco”. In 1998 he was invited to present his work at the Lisbon Expo, performing for over 25,000 spectators. His production 'Gypsy Passion' has become the most-watched Spanish  show in the world.

Not every dancer gets to be ranked so high as Joaquín. He is considered by different experts and researchers in the field of flamenco music as one of the top ten dancers in history. In 2009 his artistic legacy was declareng,d Intangible Heritage of Humanity by UNESCO. He said it is a great honour to be named in this list with all these great artists that he admires. Number one in the top 10 list of dancers is Rudolf Nureyev, number two Mikhail Baryshnikov, number three Fred Astaire & Ginger Rogers and then comes Joaquin Cortes. After Joaquin the next one is Michael Jackson. Joaquin had the pleasure of meeting Michael also in person and he said that Michael even asked Joaquin to show him some flamenco poses! Joaquin actually believes that Michael was actually more of a dancer in his soul.

There is also a day in Miami that carries his name - Dia de Joaquin Cortes, 9 November. Joaquin himself finds it amusing and the first question he asked himself was what do I do with a day that has my name?

You can enjoy his latest show "Gitano" in Marbella this Friday and Saturday night, 25 and 26 of July. The concerts take place in the Puente Romano Tennis Club.