Joaquin Cortes: “Marbella is like a second home to me” 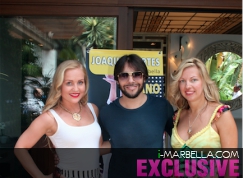 
Joaquin Cortes held a press conference on the 5th of June in Hotel Puente Romano for his two upcoming shows on the 25th and 26th of July in the Tennis Club of Puente Romano. i-Marbella also had the privilege to meet and talk a few words with the talented dancer.

Although born in Córdoba, Joaquín Cortés’ father is from Malaga, so being in Marbella is very familiar to him. “Marbella is like a second home to me,” he said.

How many hours do you train in a day?

You are a true icon. What does it take to become one?

It has been an honor to be in the list of the 10 best dancers in the history of dance, among Nijinsky, Marta Graham and all the talented dancers. Being a great dancer has always been my dream, and I think my success is a combination of tremendous passion and hard work.

You performed with Jennifer Lopez in 2001, how was dancing with her?

Jennifer Lopez comes from a family of dancers, so it was an honor from me to dance with her. This show in Puerto Rico was one of her first worldwide performances, and this was the country where her parents are from, so she wanted to do something special. So she asked me to design a choreography for her, since Jennifer is a big lover of flamenco and a big fan of me.

Will you dance with her again?

Why not? Never say never.

After the concerts will you stay couple of days in Marbella?

I don’t know yet, but I would love to. If I stay I will definitely stay at the Puente Romano Hotel and enjoy a bit of Marbella.

Joaquín Cortés was born in Córdoba in 1969 in the heart of a gypsy family. He soon moved to Madrid, where at twelve years of age he began his dance studies. At the age of 14 he was admitted as a member of the National Ballet of Spain. Joaquín Cortés travelled with this company around the world, dancing in theatres such as the Metropolitan Opera House in New York and the Kremlin in Moscow. At sixteen years of age and for the following three years he performed as a Main Dancer.

Since then, Joaquín Cortés has become the most international and renowned Spanish dance figure, having participated in major world events such as the MTV Music Awards or The Oscars, together with choreographer Debbie Allan.

Joaquín has performed in the most important scenarios and danced alongside names such as Jennifer Lopez and Alicia Keys, among many others. He made his film debut with the film “The flower of my secret” by Pedro Almodóvar. He also starred in Carlos Saura's film “Flamenco”. In 1998 he was invited to present his work at the Lisbon Expo, performing for over 25,000 spectators. His production 'Gypsy Passion' has become the most-watched Spanish  show in the world.