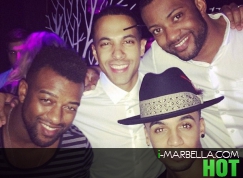 Ex JLS star JB Gill has been engaged to his girlfriend Chloe Tangey since January. Three months after the official announcement, his former band-mates Marvin Humes and Aston Merrygold flew out to Marbella to help celebrate his last days as a single man in Sisu Boutique Hotel. Marvin and Aston were joined by their friends as they did some sightseeing around Marbella and familiarised themselves with their area.Only Oritsé Williams was missing from the group.

JB said that many people have assumed that he was throwing himself into farming as a result of the group's split, but JB insisted it has been an interest he wanted long before JLS announced they were going separate ways.'I've been involved in it for some time and it's something I care about deeply,' he said.'I never wanted to be a 'gentleman farmer' and have someone else running everything. I made sure I did extensive research beforehand,' he added to the Daily Mail.'I want to learn everything I can about the industry because there is so much to learn.'

Easter by the SISU Pool