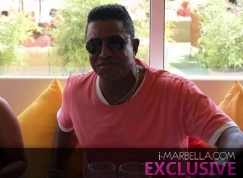 
Jermaine Jackson, Maria Bravo and their friends were having lunch in Suite del Mar.

Jermaine, his wife Halima, Maria Bravo, Patricio Moreno and their friends were having lunch yesterday in Suite del Mar. Jermaine and Halima also attended the glamorous Starlite Gala that took place last weekend in Villa Padierna and now they are enjoying "suite" life in Marbella.