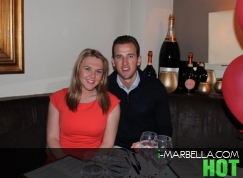 The Tottenham forward, Harry Kane, treated his childhood sweetheart Kate Goodland to a weekend getaway in Marbella. On Valentine's Day, 14 February, Harry chose La Sala Puerto Banus for their romantic night out. They started their night with champagne, continued by sharing Piri Piri Chicken Wings and Crispy Duck Spring Rolls as starters, and opted for Chargrilled Fillet Steaks as mains.