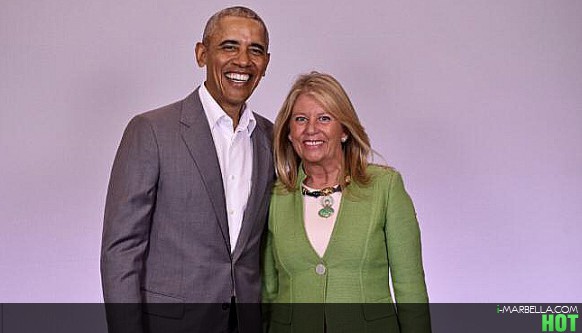 
The former US president was a guest speaker at the German multinational software corporation SAP and headed straight to Marbella to speak at the private event on June 17, 2019 organized by the Marbella Mayoress Angeles Muñoz and Mr. Daniel Shamoon at the prestigious Puente Romano Beach Resort and Spa in Marbella.

We have recently received evidence that the ex-president of the US Barack Obama actually visited Marbella in a private event that was organized by the Marbella Mayores Angeles Munoz in mid-June. Obama also assisted to a private event later that afternoon held in Puente Romano Beach Resort and Spa in Marbella, Costa del sol, Spain.

The event, that began around five in the afternoon in the luxurious Puente Romano Resort, was also attended by the mayoress of Marbella, Ángeles Muñoz.

The former US president Barack Obama paid a lightning visit to Marbella where he was mostly invited as a guest speaker during a private event organized by the German multinational software corporation SAP.

After landing in Malaga on a flight from Stockholm, Obama headed straight to Marbella to speak at the event in the Puente Romano hotel. Meanwhile, his wife Michelle Obama and the couple's daughters and companions were driven to Gran Hotel Miramar Málaga where they spent a few hours soaking up the sun on the large terrace of one of the most luxurious rooms.

Angeles Muñoz and the ex-president Barack Obama had a brief meeting during their recent visit to Marbella to offer a conference before executives of a German technology company, appointment in which the former president communicated to the councillor his willingness to return to the town soon with the aim of practising one of his favourite sports.

“We have invited former President Barack Obama to return to Marbella on a more extensive visit so that he can enjoy playing golf and all the attractions that our city offers, just as his wife did a few years ago,” said Muñoz.

Muñoz recalled that the Consistory closed last year in New York an agreement with the leading network in quality tourism Virtuoso, which brings together the largest number of luxury travel agencies in America and Oceania, in order to make Marbella a preferred destination, "an initiative that has borne fruit, as confirmed by various tourist agents in the city.

The mayoress has recalled "Marbella is no longer a destination that is unknown to the American market, but it is necessary to continue to strengthen our offer in an issuing market of such relevance"

After speaking at the SAP event, Barack Obama headed straight back to the airport where he was joined by Michelle and the rest of the party. Other guest speakers at the event included boxer Anthony Joshua and Bear Grylls. Entertainment on the night event came in the form of a private Tom Jones concert.

The 264 spacious rooms in this Andalusian-style resort spread in 27 Villas of three stories with gardens and a waterfall subtropical landscape that reaches the Mediterranean Sea. In total, the surrounding area is approximately 55,000 square meters.