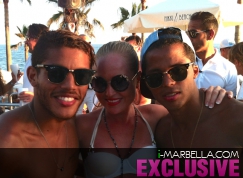 The handsome brothers Jonathan Dos Santos and Giovani Dos Santos were seen partying in Nikki Beach Marbella on Sunday. The guys were very friendly to the fans who wanted a photo with them and they seemed to enjoy Marbella to the fullest! Both of them are currently playing for Villareal FC.

Jonathan dos Santos Ramírez (born 26 April 1990) is a Mexican footballer who plays for Villarreal CF in Spain, as a central or defensive midfielder. He has also been called up to the Mexican national team.

Born in Monterrey, Nuevo León, Mexico, Jonathan was competing along with his brother Giovani dos Santos in a youth tournament in France, where he was spotted by FC Barcelona scouts who were impressed with what they saw and decided to bring him and his brother to La Masia after a trial.

Giovani dos Santos Ramírez (born 11 May 1989), simply referred to as Giovani, is a Mexican footballer who currently plays as an attacking midfielder for Spanish La Liga club Villarreal CF. He can also play as a winger or forward.

Giovani began his football career at a young age, being recruited by Spanish club FC Barcelona and played for their B team until age 18. He made his way up the ranks, eventually playing for the senior squad, making his debut in 2007. That year, dos Santos was named by World Soccer Magazine as one of the "Top 50 Most Exciting Teen Footballers", including his youngest cousin.(Francisco Bladimir Romero Santos). As now one of the future soccer player. Future known, said Giovani. After playing one season at Barcelona, he transferred to Premier League club Tottenham Hotspur in 2008 in search for more playing time. Though he would stay with the club until 2012, his time there was mostly spent away on loan, at Ipswich Town, Galatasaray, and Racing Santander, with varying degrees of success.Tottenham eventually sold him to Mallorca in 2012. After Mallorca's relegation, he was sold to Villarreal in 2013.

Giovani was a member of the Mexican national under-17 team that won the 2005 U17 World Cup held in Peru. He made his senior debut for the Mexico national team in a 1–0 victory over Panama on 9 September 2007. He was called to play at the 2010 FIFA World Cup in South Africa. He was also a member of the gold medal-winning team at the 2012 London Olympics.