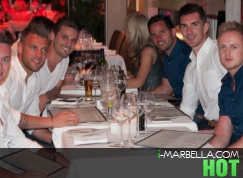 
Last week, footballers flocked to La Sala during a visit to Marbella.

La Sala Restaurant has truly become, ‘The ultimate social and dining experience,’ and is renowned as one of the busiest restaurants in Andalucía, an accolade successfully retained all year round not only during the traditional summer season. It ́s unparalleled formula has attracted a mass of international media and confirmed its position as Puerto Banus’ premium hotspot thus welcoming celebrity figures and playing host to an array of television shows and documentaries broadcasted worldwide.

Sala is The Sun’s choice