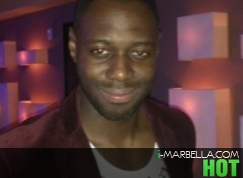 Ledley Brenton King (born 12 October 1980) is an English former footballer who played for Tottenham Hotspur and retired in July 2012. He is highly rated as a central defender, in 2009 he was named by The Times as Tottenham's 25th best player of all time. King made 21 international appearances for England. King announced his retirement from all forms of football on 19 July 2012 as a result of the chronic knee injuries that plagued much of his career. But he continues to represent Tottenham Hotspur on an ambassadorial level.

The footballer was seen at La Sala last weekend, enjoying his time in Marbella. La Sala in Puerto Banus brings you the ultimate social and dining experience, day and night. The varied menu offers a range of International and Spanish favourites, all made from ingredients of the highest quality. La Sala has recently been visited by Jamie Oliver, Harry Redknapp, Sir Alan Sugar, Tinie Tempah, Ruud Van Nistelrooy, Joe Cole, Carly Zucker, Kym Marsh and many more.