Enrique Iglesias is coming to Marbella this summer! 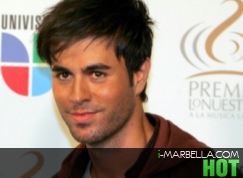 
The singer-songwriter Enrique Iglesias is coming to Marbella to perform at the Starlite Festival this summer. His concert has been confirmed for August 17.

The Spanish singer-songwriter, model, actor, and record producer Enrique Iglesias (born Enrique Miguel Iglesias Preysler; May 8, 1975) started his career in the mid-1990s on an American Spanish Language record label Fonovisa which helped turn him into one of the biggest stars in Latin America and the Hispanic Market in the United States becoming the biggest seller of Spanish-language albums of that decade.

Iglesias has sold over 100 million units worldwide, making him one of the best selling Spanish language artists of all time. He has had five Billboard Hot 100 top five singles, including two number-ones, and holds the record for producing 23 number-one Spanish-language singles on the Billboard's Hot Latin Tracks. He has also had 12 number-one songs on Billboard's Dance charts, more than any other single male artist. Altogether, Iglesias has amassed 70 number-one rankings on the various Billboard charts. Billboard has called him The King of Latin Pop and The King of Dance. Billboard also named Enrique the number two Latin artist of the years 1986–2011 (Luis Miguel taking the first spot).

And now this Latin star is coming to peform in Marbella! Enrique said he was excited about the concert because he has never performed at such a small venue in Spain (only 2,500 people will be in the audience), which will also bring him closer to his fans. He also added that he has great memories of Marbella, including his first kiss. Last year Enrique was also enjoying Marbella and he was seen out in Suite del Mar for example. What is more, Enrique’s father, Julio Iglesias, will also perform at the Starlite Gala, but a bit earlier, on the 3rd of August.