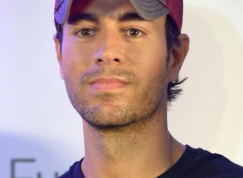 When it comes to charisma, youthful energy, and sex appeal, few can come close to Enrique Iglesias. The Spanish singer, who rings in his 40th birthday today, has had quite the year.

With a career that already spans two decades, Iglesias managed to garner even more buzz and record-breaking success following the release of Bailando, off his album, Sex and Love, which swept up awards at this year’s Billboard Latin Music Awards.

He even found time to open a string of Spanish restaurants.