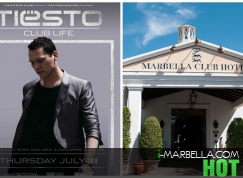 The Worlds number one DJ Tiesto is playing tonight in Sleek nightclub.

Tiesto’s only once European club date this season due to his residency in Vegas is tonight 31 July in Sleek Nightclub. But before his show he decided to relax in Marbella and he chose the luxurious five star hotel Marbella Club Hotel to stay in.

Tijs Michiel Verwest (born 17 January 1969), known by his stage name Tiësto is a Dutch musician, disc jockey and record producer of electronic dance music. Formerly known as DJ Tiësto, he is now known simply as "Tiësto", anartist name which is a twist of his childhood nickname.

In 1997, he founded the label Black Hole Recordings with Arny Bink, where he released the Magik and In Search of Sunrise CD series. Tiësto met producer Dennis Waakop Reijers in 1998, and the two have worked together extensively since then.[10] In 1999 and 2000 Tiësto collaborated with Ferry Corsten to create Gouryella. His 2000 remix of Delerium's "Silence" featuring Sarah McLachlan exposed him to more mainstream audiences. In 2001, he released his first solo album, In My Memory, which gave him several major hits that launched his career. He ranked at #1 on DJ Magazine's annual Top 100 DJs Poll consecutively for three years from 2002 to 2004.

Just after releasing his second studio album Just Be he performed live at the 2004 Summer Olympics opening ceremony in Athens, the first DJ to play live on stage at an Olympics. In April 2007 Tiësto launched his radio showTiësto's Club Life on Radio 538 in the Netherlands and released his third studio album Elements of Life. The album reached number one on the Dutch album chart as well on "Billboard Top Electronic Albums" in the U.S. and received a nomination for a Grammy Award in 2008. Tiësto released his fourth studio album Kaleidoscope in October 2009.

Don't miss this one!

Certainly the most glamorous hotel on the Iberian Peninsula, the Marbella Club was a pioneer of ‘barefoot luxury’ when opened in the 1950s by Prince Alfonso von Hohenlohe, who wanted to share Marbella’s unique climate and relaxed way of life with fellow members of the international set. Traditional Andalusian architecture combine with the immaculately tended mature gardens to create an utterly unspoiled refuge that has seduced visiting royalty, actors; musicians, sporting personalities, heads of state and high living aristocrats. In recent years the Marbella Club has acquired a modern thalasso spa, a Dave Thomas designed golf course, an equestrian center and a world-class shopping gallery. In facilities it is the equal of any international resort, but in terms of charm and character it is in a league of its own.