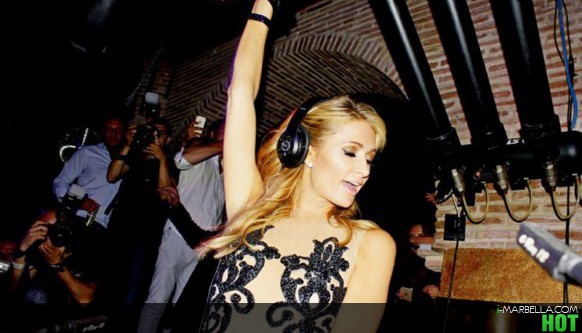 The American socialite Paris Hilton landed in Marbella to perform as a DJ at Olivia Valere.

Paris Whitney Hilton (born February 17, 1981) is an American television personality, model, actress, singer, DJ, and author. She is the great-granddaughter of Conrad Hilton, the founder of Hilton Hotels.

Born in New York City and raised there and in Beverly Hills, California, Hilton began her modeling career as a teenager when she signed with Donald Trump's agency, Trump Model Management. Her lifestyle and rumoured short-lived relationships made her a feature of entertainment news, and Hilton was proclaimed New York's leading It Girl in 2001.

In 2003, a sex tape with Hilton and her then-boyfriend Rick Salomon, later released as 1 Night in Paris, was made public. Released only three weeks before the premiere of the reality television series The Simple Life, in which she starred alongside her long-time friend Nicole Richie, the sex tape became a media sensation. The Simple Life continued for five seasons and gave both women international recognition.

Olivia Valere Nightclub is the maximum exponent of Marbella nights. Its spectacular image will suit the most sophisticated and cosmopolitan of customers!

With a capacity for more than a thousand people, Olivia Valere Discotheque has become a mandatory meeting point for hundreds of people who want to enjoy their leisure nights in the best environment in Europe.

All the details coming together for a night will remain forever among your best memories!