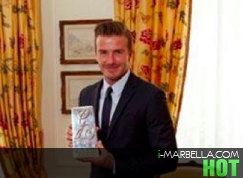 
International sporting legend, David Beckham, has been awarded the Global Gift Philanthropist honour in recognition of his personal and professional commitment to charitable causes.

David, who received the award in Paris ahead of the Global Gift Gala, has worked extensively with charities including UNICEF, the Malaria No More UK Leadership Council and the Elton John AIDS Foundation.

David said: “It is a real honour to be given this award and this is a very proud moment for me.  I have always wanted to use my position in the public eye to make a positive difference and I feel very humbled to have been recognized in this way.”

The Global Gift Gala Paris was co-chaired by fellow philanthropist and personal friend of the Beckhams’, Eva Longoria, who wowed on the red carpet in a stunning Yanina gown alongside co-host for the evening, French TV presenter and host of TF1’s hit show The Voice, Nikos Aliagas.

A host of stars including Sir Mark Thatcher, Farhad Moshiri, Steve Mandana and Mickal Landreau flocked to the event which was held at the Four Seasons Hotel George V Paris and featured exclusive performances from finalists of The Voice and singing sensation Lara Fabian.  Following the performances, a live auction was held featuring a host of unique items generously donated by companies including event sponsors Chopard, MySuelly, Piper Hiedsieck and PSAV.  David Beckham also kindly donated a pair of his own football boots for the auction which received a generous bid of £15,000, with the overall donations from the evening totalling a staggering €550,000.

All proceeds from the 2013 Global Gift Gala Paris will be divided between The Eva Longoria Foundation and The GREAT Initiative to help vulnerable women and children across the world.  In addition, Association Gregory Lemarchal will also receive a portion of the donations as the recipient of the ‘Our Heroes’ award.

Eva Longoria, who is also Honorary Chair of the Global Gift Gala, said: “The Global Gift Gala is a unique international fundraising initiative that recognizes prominent figures or organisations who dedicate their time and energy to helping those in need. We are delighted to be able to honour people like David Beckham and Association Gregory Lemarchal and celebrate their outstanding humanitarian work.”

The Global Gift Co is an organization dedicated to philanthropic events worldwide.  Its aim is to engage responsible organizations, resources, celebrities, people of influence and synchronistic brands to have a transformative global impact on the lives of women and children.

The organization was launched in 2005 by Maria Bravo and Alina Peralta, who in addition, named Eva Longoria as Honorary Chair of The Global Gift Galas & Global Gift Initiatives.  These three ladies are changing the meaning of philanthropy, and their altruistic dedication to making a positive global impact shows that everyone can be a part of something special.

The organization has three main branches; Global Gift Galas, Global Gift Initiatives and the Global Gift Foundation and to date has donated €12.000.000 to help charities all over the world.

To affect positive change on the development, welfare, healthcare and social inclusion of the most vulnerable. The Foundation helps to provide shelter, food, clothing, education, medical attention and other life-changing necessities to vulnerable groups, in particular children and women in need.

100% of funds received by Global Gift Foundation go directly to support other foundations dedicated to benefitting the lives of women and children, whether for causes such as health-related illnesses, education or human rights. The Global Gift Foundation administers funds to partner charities and in particular, celebrates the work of small or unrecognized organizations through “Our Heroes” awards.  These awards are given to organisations that can benefit from the strength of the Global Gift Co brand through donations, awareness raising and publicity generation.

About The Eva Longoria Foundation

The foundation was established in 2010 by actress, activist and philanthropist Eva Longoria. This foundation has been established primarily for, but not limited to, two charitable causes: women in the Latino  community and children. http://www.evalongoriafoundation.org/

Women play an important role in society, yet they disproportionately  lack educational and economic opportunities.

· Women account for two-thirds of the world’s illiterate adults

· In developing countries, only 63% of girls  enroll in secondary school

· Women make up only one-third of non-farm wage  earners

In spite of these discouraging statistics, we are optimistic  about the future for women and girls, especially Latinas.  Hardworking and dedicated to their families,  they are one of the world’s greatest untapped resources.

Our vision is to give women and girls the tools they need to  reach their potential. The Eva Longoria Foundation  supports  programs that help girls excel in school and attend college. Additionally, we  work to provide female  entrepreneurs with career training, mentorship, capital  and opportunity. By investing in women and girls, we hope to build a stronger  future for our world.

Furthermore, The Eva Longoria Foundation will help  raise awareness for children of all ethnic and racial backgrounds suffering from health-related problems. Eva Longoria has been a spokesperson for Padres Contra El  Cancer for the past nine years trying to improve the quality of life for children with cancer and their families.  Eva Longoria has also founded Eva’s Heroes in San Antonio, TX, in an effort to enrich the lives of teens and young adults who are developmentally challenged.

About The GREAT Initiative

The GREAT Initiative was founded to redress the gender imbalance and provide financial and organizational support to women working at a grassroots level to improve gender equality in their communities. The charity believes that gender equality is not just a women’s issue.

The organization says: ‘It is widely acknowledged that achieving gender equality at every level is a vital step to ending poverty, and although we are making big steps in the right direction there is still a huge amount to be done. 1 in 4 women will be victims of violence in their lifetime, 2 thirds of women make up the worlds illiterate and the great majority lack the basic rights we take for granted.

There’s no excuse for the level of gender inequality still prevalent today when we have fought so hard to eradicate racial and minority discrimination. It’s up to every one of us to put a stop to the social, educational, and political inequality between men and women.’

The GREAT Initiative is committed to improving the lives of women to give them the opportunities they deserve and create sustainable and impactful change in their communities through empowering individuals at a grassroots level.