David Beckham is in Marbella! 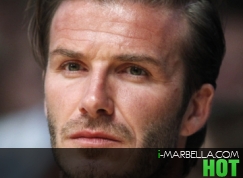 
The 37-year-old stud/footballer was seen today, on the 28th of January, shooting a commercial for Adidas in Marbella, Spain.

David Robert Joseph Beckham has played for Manchester United, Preston North End, Real Madrid, Milan, most recently Los Angeles Galaxy and the England national team for which he holds the appearance record for an outfield player. Beckham has twice been runner-up for FIFA World Player of the Year and in 2004 was the world's highest-paid footballer when taking into account salary and advertising deals. Beckham was the first British footballer to play 100 Champions League matches and he is third in the Premier League's all time time assist provider chart, with 152 assists in 265 appearances. When joining the MLS in 2007 he was given the highest player salary in the league's history, with his playing contract with the Galaxy over the next three years being worth US$6.5m per year. He is married to Victoria Beckham and they have four children – Brooklyn Joseph, Romeo James, Cruz David, and Harper Seven. In 2009, the couple's joint wealth was estimated at £125 million.

The handsome British athlete was seen in London last Sunday and today he was spotted shooting in the streets of Marbella and also on the Paseo Maritimo. The streets were closed for the shooting and the star himself arrived around 1pm to the street Camilo José Cela with a black Audi. David is one of the faces of Adidas—he signed a lifetime contract with the brand in 2003 and he also lends his name to some of their shoes. He looked quite fit in a fitted blue T-shirt, matching blue trainers and black shorts.