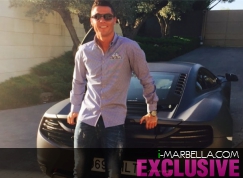 Cristiano Ronaldo with his new McLaren


Cristiano Ronaldo is standing at the front door of his house in Madrid in La Finca leaning against a Maclaren MP412C that is limited edition and that is only available in 7 pieces in the whole world.

The rumours have it that Cristiano whose salary is as high as 17 million EUR has his eye on a next McLaren 650 S.

In Spain, McLaren supercars are only sold by Marbella McLaren (Grupo Guarneri) as Mario Guarneri is the only car dealer who has the right to represent and sell both McLaren and Pagani cars in Spain.

Cristiano Ronaldo dos Santos Aveiro GOIH (born 5 February 1985), known as Cristiano Ronaldo, is a Portuguese professional footballer who plays for Spanish club Real Madrid and the Portugal national team. He is a forward and serves as captain for Portugal.