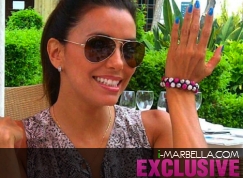 
Christian Rex jewellery was established in 2001, with the a main bussines is to sell beads and fashion jewellery at wholesale prices directly to the costumers. Now his jewellery is getting more popular every day and the celebrities such as Eva Longoria, Princess Stephanie of Monaco seem to be in love with it!

Eva Longoria and Amaury Nolasco visited Marbella for the Global Gift Gala on August and they also went out to party with Peter Nielsen, who started the successful jewellery business. Eva Longoria fell in love with the bracelet straight away and took a picture with it on the Orange Square in the Old Town of Marbella. "I have a new collection out, but I can say that the most popular and famous one at the moment is the skull one, costing 175eur a piece," says Peter.

Princess Stephanie of Monaco wearing the bracelet by Christian Rex

But not only celebrities visiting Marbella like the bracelets. The acrobat and dancer Shaffik from Cherifian Troupe, who is also a close friend of Princess Stephanie of Monaco. At the moment Shaffik is proforming in Peter Pan Musical in Brussels, but he recently travelled to Paris to do a show in a French program. He joined the performance in the biggest cabaret in the world called Le plus Grand Cabaret du Monde! His brother Zakaria, who is the general manager of Christian Rex company went along with him and also performed in the show. There they had the chance to meet many stars, who went crazy about the bracelets. One of them was Bello Nock, who according to Time magazine is America's best clown! Besides him a famous magician Dani Lary and also Jamel Debbouze fell in love with the new trendy bracelets. If you didn't know Jamel Debbouze is a French and Moroccan actor, comedian, and producer.