Amaury Nolasco is in love with Marbella! 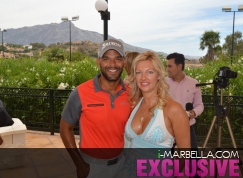 The Puerto Rican actor, who is best known from “Prison Break” and “Transformers” is currently in Marbella for The Annual Global Gift Philanthropic Weekend with Eva Longoria.

He was also playing golf at the charity golf tournament today in La Quinta Golf & Country Club and later on taking interviews at the photo call. i-Marbella had the pleasure of meeting and greeting him in person and we were also curious to know his feelings about Marbella since he is here already for the second year. “I really love Marbella, it is so beautiful here. Starting with the weather, the people, the beach and of course I like Puerto Banus a lot!” When we asked what he is working on now, he replied: “I just finished recording the series “Justified”, where I play a bad boy role. Now were half way through the season and let’s see what happens.” How did you manage to get away from the shooting? “Because we have shot it already and Im on a vacation at the moment. After Marbella I go back to work, doing another movie or a show, let’s see.”

Nolasco has guest-starred in various television series such as Arli$$, CSI: Crime Scene Investigation and ER. His first role on a feature film was in Takeshi Kitano's Brother, along others as "Orange Julius" in Universal's 2 Fast 2 Furious. He then went on to co-star opposite Bernie Mac in Mr. 3000.

Nolasco's additional television and film credits include guest-starring roles on George Lopez, CSI: NY and The Benchwarmers. He also appeared on Mind of Mencia as a guest on Sunday, April 29, 2007. He also starred in the movie adaptation of the Transformers, released during the summer of 2007. Director Michael Bay offered him to return to the sequel Transformers: Revenge of the Fallen, but he declined due to scheduling conflicts. His most high-profile role was Prison Break.

In November 2009, Nolasco made an appearance in Wisin & Yandel's music video "Imagínate" featuring T-Pain alongside Wilmer Valderrama. He plays a jealous mobster who murders Valderrama's character for sleeping with his girlfriend. He also appears in Calle 13's music video "La Perla".

In March 2010, Nolasco guest-starred in 3 episodes during the second season of Southland as Detective Rene Cordero. From September 2010 to May 2011, he costarred in the NBC show "Chase", a 1-season show about US Marshalls that hunt down fugitives. Currently he is in the TV series “Justified” Season 5 as Elvis Manuel Machado.

Amaury Nolasco: I have stayed in Marbella for a month, and it feels like heaven!