Aleksandr Mostovoi is in Marbella! 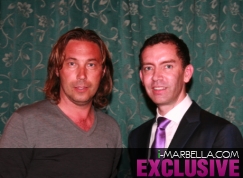 
The famous retired footballer Aleksander Mostovoi was in Marbella!

Aleksandr Vladimirovich Mostovoi is a Russian retired footballer, known as El Zar. He was often referred to as a 'genius playmaker' during his time there, in addition to a volatile temperament. Aleksandr was having dinner in Da Bruno restaurant in Marbella with Peter Nielsen, also wearing Swarovski bracelets, designed by Peter himself!