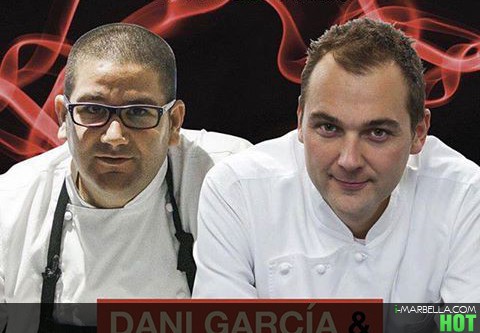 
A Cuatro Manos led by chef Dani García took place on April 18-21, 2016, to celebrate the gastronomic days. This year, a stunning total of 71 Michelin stars came together at Puente Romano Beach Resort and Spa in Marbella! With Michelin starred excellence from all around the globe, it was no doubt a gastronomic event of international prominence.

Previously, i-Marbella posted an article about Joël Robuchon, titled Chef of the Century. Also, we published a big gallery from day one. Click the links to read more!

Daniel Humm is a Swiss chef and restaurant owner; he is chef/co-owner of Eleven Madison Park and The NoMad in New York City, the former a recipient of three Michelin stars.

His cuisine is focused on the locally sourced ingredients of New York, with an emphasis on simplicity, purity, and seasonal flavors. A native of Switzerland, he was exposed to food at a very young age, and began working in kitchens at the age of 14.

From there he spent time in some of the finest Swiss hotels and restaurants before earning his first Michelin star at the age of 24. In 2003, Daniel moved to the United States to become the executive chef at Campton Place in San Francisco, where he received four stars from the San Francisco Chronicle. Three years later, he moved to New York to become the executive chef at Eleven Madison Park.

A Cuatro Manos 2016 in Marbella: 'Chef of the Century' Joël Robuchon 71 Michelin stars