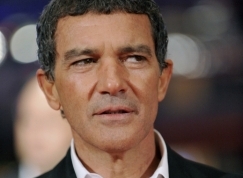 
Antonio Banderas will star in Carlos Saura's new film '33 Days'. A Spanish and French drama where Banderas will play a fully emotional Pablo Picasso role, during the time the painter was working on his masterpiece, Guernica. The title '33 Days' refers precisely to the time Picasso spent painting the mural during the months of May and June in 1937 in representation to the bombing in Guernica, which occurred in April 26 during the Spanish Civil War. The film shows how the painting saved Picasso at a time of personal crisis, focusing also on the relationship between the painter and his mistress, the French artist, Dora Maar.

The actor highlighted how this "is a character that has been haunting me for a long time and I I have always rejected. It deserves a lot of respect because I am from Malaga, because I was born four blocks from where he did. He has always fascinated me and he left Málaga a little younger than me, feeling brutally homesick for the land, just like me. I had the fortune to meet his daughter, Paloma Picasso, and she told me that he always had the intention of one day ​​returning to Málaga. She also told me that she liked to listen to me because I speak Spanish with the Malaga accent, which reminded her of her father".

"In my early days, when I came to Madrid, I had to hyde my accent, pretend a Castellano accent. Not now. This is a special film, from a Malacitan true legend, it has 33 days of the creation of Guernica, in the middle of the Civil War, with a Picasso that his heart was left in Spain while emigrating to France..."

The director himself has written the screenplay for the film along with Elias Querejeta. The film will begin production this Summer and will be filmed of course in Paris & Guernica.