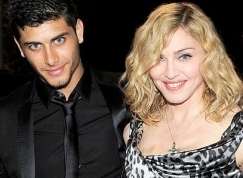 
Madonna has reportedly called it quits with her boytoy Jesus Luz because they "ran out of things to talk about."

Madge had been dating Jesus for a year now, and while neither one of them has publicly spoken about their romance, her friends think its a "miracle" it's latest as long as it did.

“The problem with Jesus is as simple as it is obvious,” a friend of Madonna’s explained. “It’s the age difference. He’s 23. She’s 51. How long could it last? How it even lasted a year seems a miracle to a lot of people. He’s perfectly nice, a gentleman and very smart. But they are in such different places in their lives. They both benefited, but it’s pretty much over now. Or, as Madonna told me, ‘We’ve just run out of things to talk about. I mean, it’s really pushing it for us to have common ground these days. We have Kabbalah, but that’s about it.’ ”

Who would you like to see Madonna date? Another boytoy or someone her own age?

rainerhelin 07-02-2010 18:14 Madonna is so old that she should dedicate herself to her children instead of picking up toyboy's. If she has failed in relationships for many prior decades, she won't do any better in the future.
0