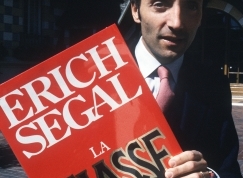 
"Love Story" author Erich Segal, whose popular romantic drama coined the phrase "Love means never having to say you're sorry", has died of a heart attack at the age of 72.

Segal, who also wrote the screenplay for the Beatles' animated film "Yellow Submarine", died at his home in London on Sunday, his daughter Francesca Segal said. The US-born author had been suffering from Parkinson's disease for many years, she revealed.

Segal was a classics professor at Yale University when he wrote the book "Love Story", which was made into a 1970 hit film. The movie -- winner of an Academy Award for best music and nominated for six other Oscars -- tells the story of a wealthy young Harvard law student, Oliver Barrett IV, who becomes estranged from his father when he marries Jennifer Cavilleri, a woman from a less privileged background.

Erich Segal was born in New York and was an honorary fellow of Wolfson College at Oxford University. He is survived by his wife, Karen James, and daughters Francesca, 29, and Miranda, 20.