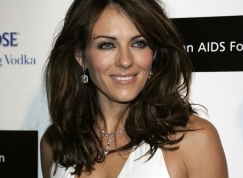 
At the age of 44, Liz Hurley has confessed how she has been forced to adopt a more extreme dietary plan to keep her famously svelte figure.

Miss Hurley has revealed how she has had to cut out coffee and wine from her diet. Now, instead of enjoying a glass of claret when she is at a social gathering, the model and actress has turned to vodka to keep her midriff trim.

Miss Hurley, who lives in Gloucestershire-with husband Arun Nayar and her seven-year-old son Damian, admitted: 'I used to drink an awful lot of coffee, but I was told after the age of 40 you have to be careful with coffee and wine. Apparently, that can be one of the reasons older women get bloated around their stomach.'

With her acting career sidelined, Miss Hurley has instead concentrated on her swimwear range and modelling. Following the birth of Damian, she revealed how she only eats one meal a day and often goes to bed hungry. It was also reported last year that she has just one square of organic chocolate or one tablespoonful of ice-cream when she wants a treat.