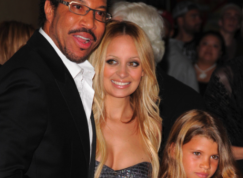 The singer is planning to invite a host of musicians to Nicole Richie and her fiance Joel Madden's impending nuptials and is hoping they all take to the stage at some point during the evening.

A source said that all of the biggest names in music are getting an invite. Lionel is asking some to sing. He wants the reception to be a big concert. Among those invited are Tina Turner, Rihanna, 50 Cent and Leona Lewis and 60-year-old Lionel also intends to serenade the newlyweds himself.

Nicole, 28, and Good Charlotte rocker Joel, 31, have already started to plan their big wedding day - which is rumoured to be taking place later this year - and proud dad Lionel has previously admitted he can't wait to take his daughter down the aisle.

The singer - who legally adopted Nicole when she was 9 but has raised her since the age of two - said: "My happiness for Nicole and Joel knows no boundaries. They have given me two beautiful grandchildren, Harlow and Sparrow, and have proven to be great parents. "I am not sure who is luckier, Nicole and Joel to have each other, or me, to have both of them in my life. I cannot wait to give away the bride!"